Sing mit Aladin is a compilation of songs from the Dingo Pictures movie Aladin that was most likely released in 1993.

The film begins with "Teppich fliegen", followed by a shortened version of the film. The parts without songs are strongly shortened with an additional narrator. Some of the songs also have scenes like in "Teppich fliegen" where the same guy points to the lyrics. The credits differ from the normal version and show pictures of some characters with the names of the voice actors, similar to the credits of "Der König der Tiere", "Pocahontas" and "Hercules". 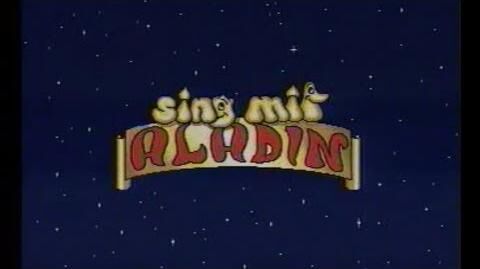 Retrieved from "https://dingopictures.fandom.com/wiki/Sing_mit_Aladin?oldid=5971"
Community content is available under CC-BY-SA unless otherwise noted.