Wabuu is one of the characters from Dingo Pictures' movies. He is notable for being the most popular Dingo Pictures character by fans (alongside Oro from Abenteuer im Land der Dinosaurier). He is voiced by Armin Drogat and is a knockoff of Meeko from the Disney version of Pocahontas. He is usually seen hopping around the forest singing his signature song.

Wabuu is a gray raccoon. He has a lighter gray belly with dark gray hands and feet. The fur around his eyes are white as opposed to the usual black seen on most real life raccoons. He also has a light gray tail with two darker stripes. He has blue eyes.

Wabuu is a raccoon who likes playing practical jokes on the animals. He means well and does no harm (except for one time, by accident).

In Pocahontas, he is Pocahontas' pet raccoon. He usually follows Pocahontas wherever he goes. He fell in love when he saw Princess, and they both started a relationship.

In Wabuu der freche Waschbär, Wabuu became more of a prankster. He fools some of the animals and laughs about it. For example, he fooled the grumpy bear with a bag of sweets. But one day, things would go too far...

One day, Wuschel told Wabuu that it would take forever to bring all of his nuts home. Wabuu then has an idea to get an axe to cut down a tree to use as a bridge. As he grabs an axe from Farmer Alfred's workshed, he is halted by two of Alfred's watchdogs. After a conversation about a stolen bag of sneezing powder, Wabuu leaves and gets to Wuschel.

He proceeds to chop down the tree, but two birds tell him to stop. The tree then falls, and the two birds begin sobbing. They tearfully tell Wabuu that their nest was in the tree with a few eggs. They begin calling Wabuu a "child murderer" which causes most of the animals to come over to see what all the commotion is about.

The two birds tell the animals that Wabuu killed their baby. Everyone gets angry at Wabuu, and they all begin looking for the egg. They eventually find one, and Wabuu looks sadly at the egg. But then, a little bird pops out! Everyone is happy that the birds' baby didn't die.

Wabuu then notices that the grumpy bear is holding one of Wuschel's nuts. All of the animals realize that Wuschel wasn't here the entire time. What they don't know is that Wuschel is under the tree that Wabuu chopped down.

The next day, Wabuu and the bunny talk about Wuschel's disappearance. Wabuu grabs out a trumpet and begins blowing it, thinking it will grab Wuschel's attention. By now, Wuschel is passed out under the tree, but the animals don't realize this. All of the animals eventually find what they think is the tail hair of Wuschel. Everybody gets angry at Wabuu because they think he killed Wuschel. Wabuu tells them that he only tried to help him. Everybody begins searching again, but no luck.

The next day, the mole digs a hole, and eventually finds Wuschel. He tells everybody that Wuschel is dead from the tree. Wabuu walks over to the tree and gets Wuschel out. Wuschel can only moan and groan. The animals tell Wabuu not to touch them, and that the bunny can heal him.

The next day, Wabuu gets a present for Wuschel, and he comes to see that Wuschel is up and talking again. Wabuu gives him the present, which is a can of peanuts. To show everyone that he has improved himself, Wabuu makes a picnic, which all of the animals enjoy. Wabuu then sneaks out and grabs a cake with the sneezing powder on it. He gives the cake to animals, which ends in a lot of sneezes. Wabuu just laughs.

"Wow, and that's what they call "explain gently"!"

Wabuu on the Pocahontas end credits.

Wabuu on the German Jünger VHS. 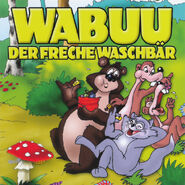 Wabuu on the German radioplay CD.
Add a photo to this gallery
Retrieved from "https://dingopictures.fandom.com/wiki/Wabuu?oldid=6387"
Community content is available under CC-BY-SA unless otherwise noted.